Enjoy the live music and entertainment during our four day event.

From Campdrafting to Live Music & Social Functions there is something for everyone! 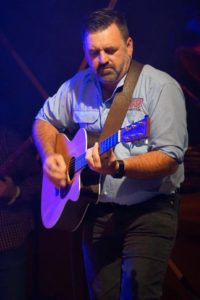 The Ron Sellars Band is comprised of a mix of professional musicians from a wide range of musical backgrounds, fronted by award-winning vocalist, Ron Sellars.

Born in Roma, Queensland, Ron was raised on cattle and country music, which began a love for country music.  Having cut his teeth in the music industry by competing in country music festivals all around the state, Ron has won a wide range of awards and accolades including the coveted North Queensland Champion of Champions and winning a spot in the finals of the Telstra Road to Tamworth.

These humble beginnings saw Ron release his first album “Rain on the desert” to high acclaim.  He then backed this up with the highly popular album, “Sing Me a Little Town”.  “Sing Me A Little Town” was nominated as Best New Australian Talent at the Victorian and National Country Music Awards, and the album also claimed a place in the finals of the Queensland Country Music Awards.

Ron’s speciality is reading a crowd – playing the songs that guarantee punters kick up their heels and dance the night away.  Where there’s an event that people can’t stop talking about, you’ll find the Ron Sellars Band.

Here’s a little on Brittany-Elise

Brittany-Elise is a vibrant, award winning, singer songwriter from Central Queensland who has certainly been kicking goals within the music industry. Having recently returned from pre-launching her debut album ‘Something More’ in Nashville, Tennessee, 2019 has seen her album debut at #2 on the Australian Country Music iTunes Charts and #20 on the all genres charts, as well as performed to a Sold Out Album Launch in Central Queensland. Brittany-Elise’s single ‘Another Day’ also debuted at #3 on the Australian Country Music iTunes Charts and #8 in the Top 40 Australian Country Airplay Charts, still remaining in the chart for seven weeks. She is also a graduate of the world-renowned Senior Australian Academy of Country Music Excellence, opened the Tamworth Country Music Festival in Bicentennial Park to over 7,000 attendees and has won various prestigious awards.

Brittany-Elise’s powerhouse voice and storytelling lyrics have seen her open for Lee Kernaghan, and work alongside some of the industry’s greatest including Graeme Connors, Kevin Bennett, Lyn Bowtell, Amber Lawrence, Simon Johnson, Carter and Carter, and The Bushwackers.  Brittany-Elise is an artist making her mark on the Australian music scene and definitely an artist to keep your eye on.

Here’s a little on Chloe Keller 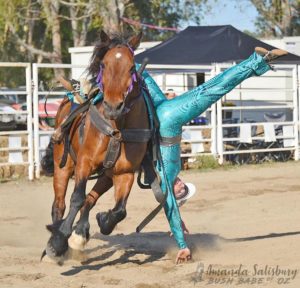 Chloe Keller, a locally based trick rider will perform prior to the State of Origin Campdraft on Saturday evening!

Chloe has just turned 16 years of age and has a huge future ahead of her! She received her horse – named Pony also 16 years old as a 9th birthday present and since then, together they have travelled a lot of kilometres to attend campdrafts  pony club meets, mustering, and a couple years ago she started to learn Trickriding with the help from her friend Breanna Jayne Horsemanship. Together they’ve  preformed at the Calliope rodeo and the Australian Stock Horse Sale. Don’t miss Chloe at approximately 6pm Saturday evening.